Lightning and the Panasonic GX8

I've played with shooting lightning in the past. Usually, a tripod is required, and an aperture open for 20 to 30 seconds. The exposure is treated as a flash shot with the light source being the lightning itself.

But what if you don't have a tripod handy and you're experiencing some spectacular electrical discharges? You can always try to react to the lightning as quickly as possible and fire off a shot. This is really hit and miss. Our reaction times are typically not fast enough, and in the excitement of it all, we'd have a tendency to shake the camera as we jam hard on the trigger. It would be better to shoot in a high-speed burst mode. You'll be more able to capture some secondary flashes, as in this shot.

This is where Panasonic's new GX8 camera can really help. I recently purchased one to explore the world of Micro-Four-Thirds photography. Panasonic has a shooting mode called 4KPhoto, which essentially allows you to select frames out of a 4K video file. Each frame is 8 mega-pixels, so it's large enough to make 8 x 10 prints. Normally, moving subjects in a video stream need a slight bit of motion blur to make the video smoother to our eye. But 4KPhoto frames retain all the settings of the camera that we would use for stills, so are as sharp as we want. We just need to review each frame and pick the one that captured the exact moment we want. Panasonic makes this a very easy process in-camera. Or, simply import the 4KPhoto video file into Photoshop or Lightroom, and analyze the frames there.

One feature of 4KPhoto is that it can actually get a picture before you press the shutter release. It's as if the camera is reading your mind for getting the shot you want. What it's really doing is very clever, although it does tend to slurp up a lot of battery juice. It's continuously recording one second, or 30 frames, of video into a FIFO buffer.  FIFO means First In, First Out. The buffer never stops filling, because just as the last frame is recorded the first frame is erased, so room in the buffer is always available. Then, when you press the shutter release, another one second of video is recorded and attached to the FIFO buffer. Both pieces, now one file, are saved to your memory card. You now have a 60-shot burst of 8 mega-pixel pictures to choose from, taken before and after you pressed the shutter release. No matter how slow your reaction time, the odds of you getting the shot is now much better.

This is fantastic for capturing that one precise moment that is so difficult with fast moving subjects like children, wildlife, and in this case, lightning.

Now, back to me.  Once I figured out how to activate 4KPhoto mode in my GX8, and adjusted my desired settings, I went out into the night where the lightning bolts were flashing every 30 to 60 seconds, or so.  (Please don't do this right under the storm. Lightning is extremely dangerous. My storm was many miles away. It was so far away, you couldn't even hear any thunder.) Of course, some bolts were more spectacular than others. With my camera solidly steadied against a rail and post, every time I saw a bolt flash I pressed the shutter release, trying to do it as smoothly as possible.

Click: 60 exposures. Click: another 60. And so on. After about 10 minutes I had accumulated what I thought were enough frames to have captured at least something.

After importing all the 4K video files into Lightroom, I was able to quickly scan through each frame for something interesting, and save the frame for further processing. I threw away many frames that were totally black, and also many that just weren't what I was looking for, like the picture above with no bolt.

The four best shots are shown below. The first two show some blurring of the lightning bolt, and I think that was from my excitement and jabbing the shutter so hard early on. The other two came after I calmed down and got into a more deliberate and smoother execution. 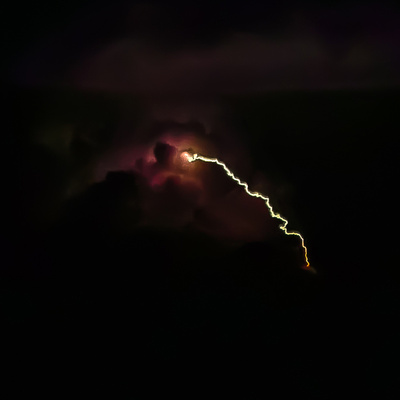 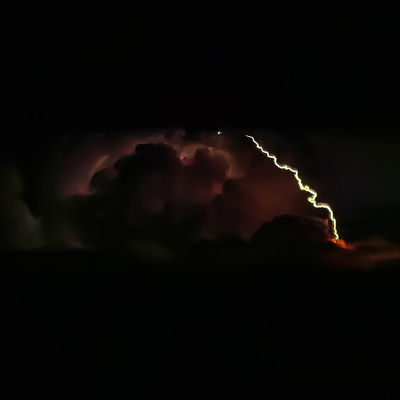 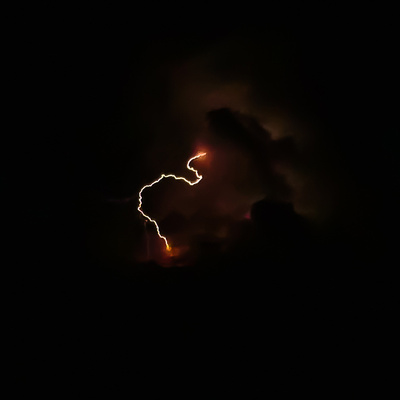 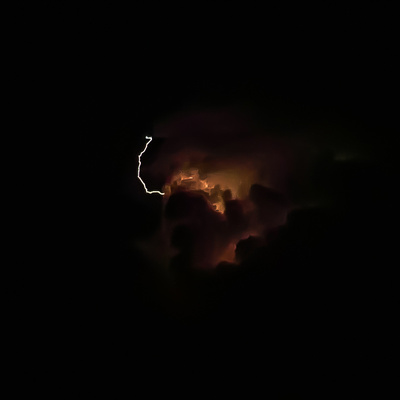