This installment is the second of two parts. Part one may be viewed here.

There, at the intersection of Saratoga Road and Howell Prairie Road, directly in front of me, lay a good sized pond with a few young trees lining its bank. The sun was low in the sky and directly behind one of the largest trees, shooting its rays through the branches.  I had to pull over, in spite of the fact that I wanted to get to Brooks before the sun was down.

I walked across Howell Prairie road and approached the pond, walking up and down parallel to it to find an angle I liked.  I was too far away, and a rather wide and muddy drainage ditch separated me from the fence that was in the way of the picture I wanted.  If I could get on the other side of the ditch without falling on my face and getting covered in muck, I'd be able to lean on the fence to steady my shots.

Finally, I found a somewhat drier spot in the ditch and gingerly stepped across. I was quit a distance from where I wanted to shoot, so I followed the fence line back.  I took several shots at different exposures and angles.  Shooting into the sun is always difficult. You know you're probably going to get lens flares or reflective spots, and the camera wants to underexpose because of the brightness of the sun, leaving your main subject dark.

I decided to take two approaches to editing this scene. One would be a single-shot, as sharp as I could get it, high contrast approach.  The other would be multiple exposures merged together for a softer, more of a "through-gauze" kind of view. You decide which you like the best.  Maybe even leave a comment to tell me why.

I had to get a move on. The sun was getting lower and lower, and Brooks was still about 8 miles away.  Now, where was it that I crossed the ditch?

I didn't have much time left, so I drove down Howell Prairie Road without too much looking around for photo opportunities.  I remember my wife said that she saw the farm with the barn with Mt. Hood behind it along Highway 99-E.  She was fairly certain that it was south of Brooks where she had seen it.

By the time I reached Brooks, the sun was touching the horizon and the sky was pink and red.  At Highway 99-E I turned south.  If Tanya's memory was accurate, the farm should be on my left, so I drove and craned my neck, keeping Mt. Hood in view as much as possible, looking for that scene.

I drove all the way down to the Lake Labish onion fields, but there was no sign of the barn with Mt. Hood behind it.   I decided to turn around and go north, retracing my path and perhaps seeing it from a better angle.  But by the time I got to Brooks without finding it, I had pretty much given up.  The sun had just dipped below the horizon, and light was beginning to fade.  I simply had nothing else to do but to drive home.  It was obvious I had missed my opportunity.

About a mile north of Brooks, to my right, with Mt. Hood in the distance, there it was: a farm, a barn, a pasture, and cows!  Okay! Park on the shoulder out of traffic, and let's see what we can do in the less than ideal light.

I grabbed my camera and jumped out of the car.  About 8 cows were grazing in the part of the pasture closest to me, closest to 99-E.  I just kept taking pictures as I slowly walked past them.   As I approached, they began to look a little skittish, and a few bolted to the other side of the pasture.  I knew if I could somehow keep them close I could compose a more interesting picture. But how?  How do you speak moo-talk?

Fortunately, one of the cows was more curious about me than afraid. She stood her ground by the fence and just watched me. As I walked, I was able to align the cow, the barn, and Mt. Hood for a pretty good shot. 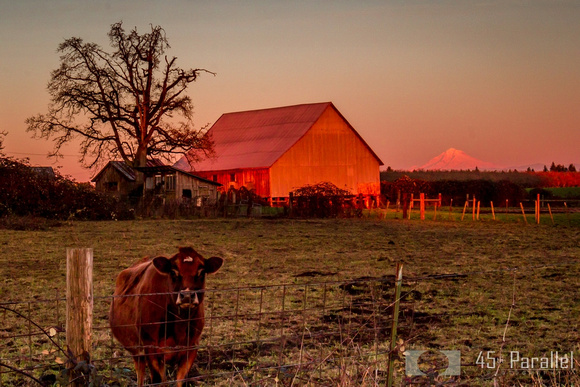 The farm at sunset

After snapping this shot, she had had enough, and turned and walked off to join the rest of the herd.  Little by little they all made their way to congregate to the right of the barn. It was a hodge-podge of poses, and nothing I shot then impressed me as much as this one.

I drove home happy.  I was glad I was able to find the location my wife had in mind, and I was feeling good that I had grabbed a few good images elsewhere that day.

Such is the luck of meandering.