I've been spending a week on the Oregon Coast, and the weather has been spectacular, by and large, and wonderful for some colorful photographic opportunities.  Unfortunately, on our fifth day, the weather turned gray and gloomy with scattered rainfall.

So, as I was sitting at the dining table of our rental house, looking out onto the drab, pale beach, the thought came to me this was the perfect opportunity to try an experiment I had been wanting to do for quite some time.  I decided to try to make a decent long-exposure High Dynamic Range photo of the beach view from our rental's covered deck.

I pulled out my Neutral Density filters and mounted an ND4 and an ND8 together in front of my Canon 24-105 f/4L lens. Along with my tripod, I set the camera up on a patio table and composed the shot in Manual Mode at f/22 and ISO-100. Using the camera's built-in 2-second timer to eliminate any camera shake caused by my fat fingers, I fired off five shots, changing the shutter speed with each shot.

From under the covered deck, and shooting through the falling rain, this is what I got:

As you can see, there is very little contrast and the light is so diffuse that all colors are rather muted.  This is where the HDR concept comes in.  It is able to bring out details in the under-exposed parts of the picture, and temper the blown-out sections of the picture.

I used a program called Photomatix to align and merge the separate exposures into one.  As you might expect, multiple exposures over a long period of time result in slightly different positioning of elements within the picture.  Plants and trees are moved my the wind. Wave action, of course, is blurred.  Birds and people move.  These will leave artifacts in the merged picture called "ghosts" that are quite distracting and detract from the image.  Photomatix has the ability to manage ghosting and minimize its effect.

Here is the resulting merged picture after processing by Photomatix, using its default settings, which is usually a good starting place before feeding the it into Lightroom or Photoshop for final adjustments. 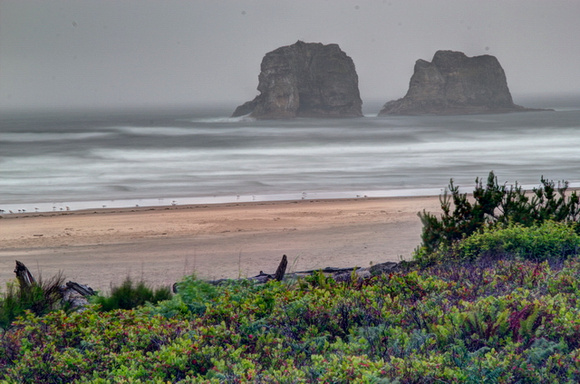 I like all the elements in the picture that didn't move, like the birds and the rocks.  They are fairly sharp and detailed.  I also love the effect that the long exposures had on the ocean waves, giving a silky smooth effect.  And the horizon has been made soft by the rain fall and mist I had to shoot through.  I'm not too keen on the plants in the foreground. Their coloration and blurred effect detract from the picture and draw your eyes to them, spoiling the overall look of the scene.

I then took the picture and imported it into Lightroom, so that I could crop it and tweak the colors and contrast until I was happy with it.

I think it's not too bad for a first try at this sort of thing.
Keywords: HDR, dynamic, exposure, high, high dynamic range, long, range