Back in the late 1960s, I worked for American Broadcasting Company in Hollywood, California, as a page.  We were a part of the Guest Relations Department, and were responsible for managing studio audiences, TV show ticketing, backstage security, and so on. I worked on many classic TV shows, including The Hollywood Palace, American Bandstand, The Lawrence Welk Show, General Hospital, The Dating Game, and The Newlywed Game. However, I was assigned to one show more than the others, and that was The Joey Bishop Show, ABC's late night attempt to compete against Johnny Carson.  I can truly say it was the one job on which I had the most fun, ever, and I have many fond memories from it.

At the time, I owned a couple of Polaroid cameras. One was a big, rather ungainly camera that had the capability of using color film. The other was a smaller, more portable, black and white only camera, called the Swinger.  Needless to say, management frowned on us carrying cameras while on the job, so my photo opportunities, while numerous, were not easily taken advantage of.

Consequently, I have only one photograph of myself in my page uniform. It's a small black and white shot of me standing in front of the studio where the Joey Bishop Show was taped. I have always wished I had a color shot. The black and white photo didn't do our uniforms justice. The uniform we were required to wear included a red blazer with black lapels, an ABC logo patch on each shoulder, and black pants with a red stripe running the length of each pant leg on the outside seam.  All of us pages hated it, and wished we had uniforms like the NBC pages with their classy navy blue blazers and gray slacks.

In comes colorize-it.com, an easy way to transform black and white photos into color. It, of course, isn't perfect, but if you have some simple photo editing software, it gives you a head start and saves a lot of time.  Below is the picture of me in my page uniform, taken in April 1968.  On the left is a scan from the original b&w Polaroid print, and on the right is the output from colorize-it.com. I then spent about 10 minutes of additional editing work in Adobe Lightroom. 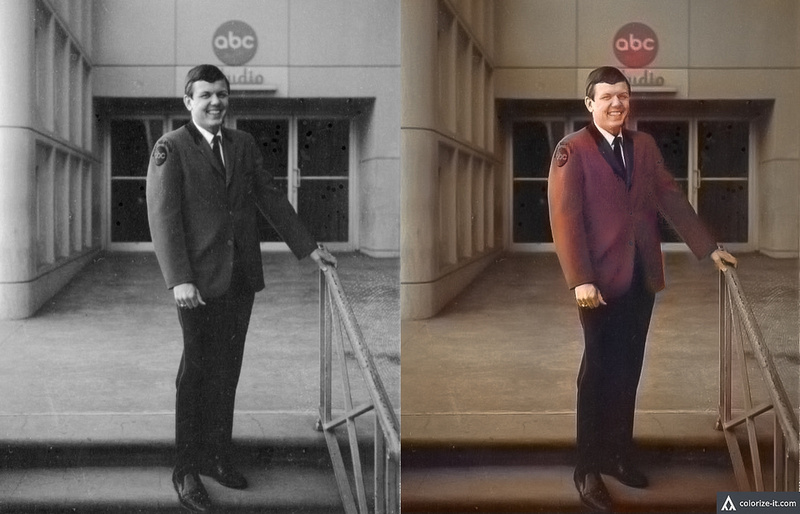 Before and AfterThe original black and white photo of the left, and the colorized photo on the right.

As I said, it isn't perfect. The program has to make lots of assumptions about colors. In my case, it assumed the color of my coat correctly as red. Unfortunately, it misjudged the ABC logo in the background. The logo was actually blue.  But if I didn't tell you, would you have known? Of course not, so it's not so bad. Having a colorized picture of a precious memory that is 95% correct is much better than nothing.

I recommend giving it a try. You have nothing to lose. Just upload your test photo to the web site using its "Upload" button and see how well it does. There is a purple bar that is displayed on your photo that you can slide back and forth, allowing you to see the "before" and "after" images. And then you can download the result back to your computer. What's more, it won't cost you a penny.